I was having a difficult time yesterday giving you the location of the run in with the Muskoxen but I finally found a better map. My diary is not as complete as I would wish. I'm not a writer. Will recorded everything. He wrote in his diary every morning, a kind of discipline that he has always exercised. He has been helping with details. Before our meeting we had crossed the Lewis River earlier in the day and met this bull some miles further up the river. 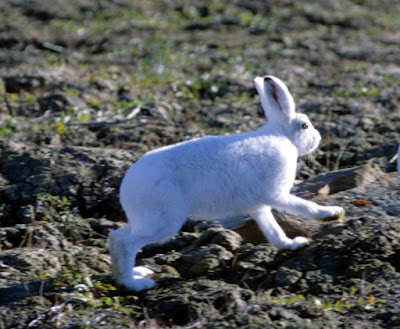 The presence of wildlife was centered around Lake Hazen. Freshwater Hazen is about 45 miles long, 7 miles wide and 900 feet deep. The Glacial Rivers flow into the lake and the water flows out the Ruggles River to Chandler Fjord on the SE side. Near the west end of the Lake we encountered beautiful white Arctic Hares. Arctic Hares can be as long as 28" tall and weight up to 17 lbs. When there's snow on the ground they are camouflaged. We did not see any of the legendary herds of Hares but did come upon a number of smaller groups. I had never seen big white rabbits in the wild. It was so wonderful!! They seemed mythological! 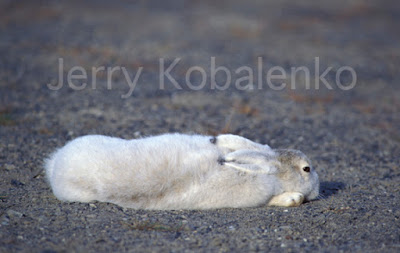 We are walking along these tabled, stepped moraines. In the distance I can see 3 pure white Arctic Hare statues, sitting perfectly upright looking straight ahead. They think they are camouflaged but there is no snow. The dogs haven't noticed them yet. We grab Blackie and Oscar and get them clipped in and are just trying to get Chester clipped when he catches site of them and starts running. Zap bursts after him. They get amazingly close to the Hares before the hares realize their dilemma and bolt up the moraines with the dogs in pursuit. There was no concern that the dogs could catch the Hares but we needed to get the dogs under control. Hares are very fast!! 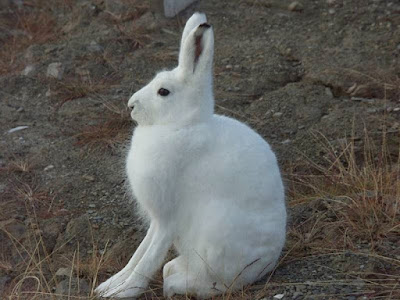 I was holding on to the remaining boys while Will took off after Chester and Zap. Up and over a huge moraine would go the Hares and then disappear on the other side. Next Chester and Zap would run up and over and disappear. Then Will would run up and over and disappear calling their names louder and louder. Then I would see the hares reappear running up and over the next stepped moraine and disappearing.  Following them, the dogs appeared though further behind, still in the hunt and then disappear. Behind them would go Will, up and over and disappear. Then again the Hares would reappear and repeat the same, Chester and Zap again and Will following. It was completely hilarious. I wish I had a movie to show you. Eventually Zap emerged off to the right side, heading back my way. He knew he was in trouble and elected to circle route himself back. I called him and as he lumbered back to me I could see Will  still running after Chester. Young Chester. Lots of energy. Will finally caught him and returned. He didn't see the humor in it at the time. I might not have if I had been the one chasing them. It was wonderful!! 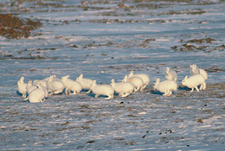