The Land of the Midnight Sun - Resolute Bay

On the morning of June 5, 1982, I caught my next flight to Yellowknife, the NWT Government Capital and then on to the long flight to Resolute Bay. Resolute is very close to the fabled Northwest Passage. The transplanted temporary workers in Resolute Bay often referred to it as a 'gas station/gravel pit' or 'the armpit of the north'. They worked at the airport or one of the Government facilities. It's basically all gravel bar. I stayed at Jesudason's Bed and Breakfast in the Inuit village a couple miles from the base where life seemed pleasant and active 24 hours a day in the land of the midnight sun. Schedules were kaput. There were polar Bear Alert signs everywhere. Serious Polar Bear awareness required.

On arriving, my agenda required that I contact the Manager of Borek Air, give him the bottle of whiskey that I had brought along for this purpose and he would get me on one of his resupply flights to Eureka. I wonder if its still done that way? I finally found this fellow in the Arctic Bar near the airbase with a few under his belt. I politely endured a few crude suggestions to the tune of  'For some people a bottle is enough but I'm thinking it may not be enough for you!' I turned around and returned to the village. Sadly, as much as I would have loved to... I could not afford to shred this guy, I needed a ride. I can zip it when I have to. There weren't enough women up there then. He apologized after he sobered up. I guess that's something right?

Resolute Bay village was significant because this is where I first met an older Inuit woman named Annie who allowed me to spend a day with her sewing Kamiks, sealskin boots. Her daughter spent the day with us interpreting. Before tape measures there were hand measures and string or rope probably sinews. To measure the length of my foot, she had me place my hand on a piece if paper. She marked the back of my palm. Then she instructed me to roll up and over on my middle finger to the second knuckle and she marked that. Magically that was the correct! That was the length of my foot! So simple! Next she showed me how by holding my fists together, the circumference measurement was the ankle opening needed for my foot to fit into a boot. These are a couple of examples she used, there were many more. THEN she whipped out her tape measure laughing!! We laughed a lot that day. She was so sweet and dear, I appreciated every minute we spent together.

Years after I started Steger Mukluks and had been sponsoring mukluks to Will's expeditions, I returned to Resolute Bay while working on his 1995 Arctic Project Expedition. I took a pair of Steger Mukluks to Annie. Gordon Wiltsie, the team photographer, came with me to meet her and get a photo of us together. I have it in my boxes of photos to be cataloged but it seems I'm waiting for Godot.  Gordon is an Internationally famous Arctic Photographer. Google him! He's an old friend, much accomplished. Gordon, if you're reading this, any chance you still have that picture?? I know it's a long shot. 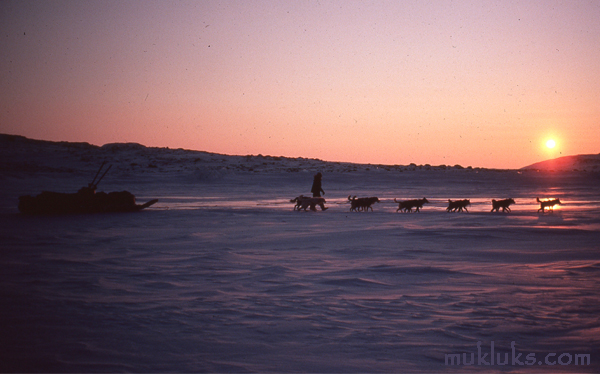 I'll close today with a photo of Will and Bob on the trail. The sun appears to be setting in this pic but is not. The earth is turning in a rotation that exposes the sun in a perimeter view. We always traveled at night when the sun was lowest. The weather is cooler then and better for the dogs.

Photo by Will Steger.